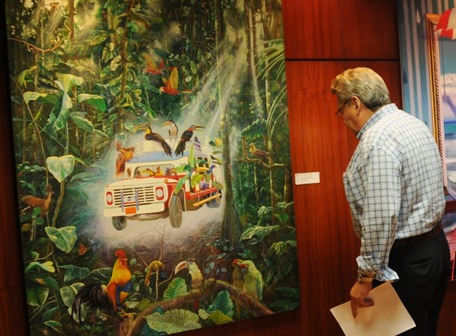 Pablo Martínez, director of the Luis A. Noboa Naranjo Museum, at the headquarters of the Third Alvaro Noboa Guayaquil International Biennial of Painting, he emphasized the variety of styles employed in the artistic event as one of its strengths. Among them are: impressionism, expressionism, magical realism and hyperrealism.

The work of Ecuadorian René Bohórquez, winner of the competition’s First Álvaro Noboa Acquisition Prize, falls within the framework of expressionism, noted Martínez, which thereby differentiated this present version of the Biennial, he added, as “in the previous two, those in first place created hyperrealist works.”

Today, during the exhibition’s inauguration, Bohórquez will receive his prize of $10,000. Cuban William Hernández, who achieved second place in the competition, will not attend the ceremony, but in his place, his niece Aitana Brito, daughter of Cuban artist resident in Guayaquil, Saidel Brito, will accept the $5,000 prize money.

Furthermore, it is anticipated that the five artists nominated for Newcomer prizes and who have won $1,000 each, will attend. They include Ecuadorians, Leonardo Lozano, Javier Gavilanes, Jacqueline Villamar, and Nelson Santos, as well as Robert Seng from the United States.

The attendance of the seven painters who received Honorable Mentions is also expected: Ecuadorians Juan Caguana, Jorge Velasco, José Cueva, Lenín Mera, Wilson Quichimbo, Dennis Navas and Hellen Constante.  Jeffrey Bishop, from the United States, was given a special mention, and formed part of the jury.

Touring the assembly of 80 displayed works admitted to the Biennial, Martínez considered that the jury made a selection in which “creativity” outweighed all else.

He explained that the works proposed to this exhibition, located on the first floor of the museum, are extremely painstaking, that is to say, the artists have been “diligent and detailed,” through which they have achieved a production of high quality and esthetic.

He pointed out that now artists are considering deeply what they are going to send to the Biennial. “Before, we received many works from young artists who had recently embarked on their careers and who were experimenting with their works,” he added.

The museum received up to 240 proposed works, belonging to 201 artists. In a first selection, under the responsibility of Ecuadorian artist, José Landín, who worked as the Biennial’s curator, an average of around 25 paintings were eliminated, said Martinez, because they didn’t have “the support, the study, the preparation to be in the museum.”

And from those, they chose 14, from which First and Second Place Acquisition Prize winners were chosen, the five Newcomer Acquisition Awards, and the seven Honorable Mentions.

Nonetheless, the Museum Director decided that the works that did not receive prizes among those admitted, would also be exhibited, whereby they will be on display on the lower floor of the museum from tomorrow when the Biennial will be open to the general public.

Furthermore, Landín will today receive a recognition for his collaboration in the three versions of the event.

Notes
The inauguration and award ceremony of the third edition of the Guayaquil International Biennial of Painting is today, at 7pm, in the Luis A. Noboa Naranjo Museum, at P. Icaza 302 and Córdova, 1st floor.

The exhibition will be open from tomorrow until May 5, from Tuesday to Friday, from 10am until 6pm, and Saturdays and Sundays, from 1pm until 6pm. Entrance free.

The exhibition consists of works from 20 countries, including Italy, Belgium, Venezuela, Bolivia, Russia, Spain and Canada.

“The selection was difficult for the jury, but in general the level of works chosen for the exhibition, and as winners, is very high.”

“The jury’s selection regarding the prizes and the works to be displayed is accurate. The works pertain to the proposals put forward by the competition’s rules and the participants’ creativity can be seen.”