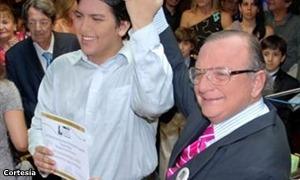 The idea of putting together an international biennial to gather artists from all over the world, was an initiative of its director, Attorney Pablo Martínez Rojas, with the support of founder and life President Álvaro Noboa Pontón, in honor to the “INTERNATIONAL BIENNIAL OF PAINTING ÁLVARO NOBOA”. It has been so well received that to date there has been three international biennials with the participation of artists of America, Europe, Asia, Oceania and Africa.

Pablo Martínez points out that the three biennials habe been a success because through them, worldwide artists can come and show their work. Also, an important issue is the seriousness with which these events have been carried out since they have been supported by a jury with a recognized trayectory and art critics well known nationally and internationally, like Jeffrey Bishop, Enrique Tábara, Joseph Roberts, Larissa Marangoni, Theo Constante, Mariela García, Alejandra Rossetti, among others.

The first International
Biennial of Painting ” Álvaro Noboa”, was held on April 1 of 2008, and therefore, in contrast with the other two, that were held afterwards, just Ecuadorian artists were part of it, no matter their place of residence, and also foreigners residing in the country. More than 100 pieces were received, specially from young artists, which were exhibited in the eight rooms designated for the event. Prizes of de $ 5.000, $ 3.000 y $ 1.000, were delivered to the winners of the first, second and third places.

The winner of the first place was Jimmy Lara Gutiérrez, with his work “Press yo continue”; in second place, Wilson Eduardo Quichimbo, “It has been said” and the third place was to Pedro Dávila Silva, with his piece “The game of the toad”; besides, mentions of honor were awarded to various other artists.

The second International Biennial of Painting “Álvaro Noboa”, was carried out on April 28 of 2010. The purpose of the event was to strenghten the friendship between the countries of the world and highlight their creative ability. 24 countries participated and more than 300 national pieces were exhibited; for this edition prizes of $20.000, $10.000 y $5.000, were delivered to the three top positions, respectively. The winners were: first place , Juan Caguana, with his piece “picnic”; second place, Saidel Brito with ” Capitulants” and third place, Kate Vrijmoet with “Shotgun Accident”. Likewise, mentions of honor were given to other participants.

The third International Biennial of Painting “Álvaro Noboa”, was held on April 4 of 2012. National and international artists were part of it. This edition was marked by previous events that took place prior to its opening, like fashion shows by Ecuadorian designers with the theme” Elements of Nature” and it was highlighted by a variety of artistic trends. Prizes of $10.000, $5.000 y $1.000, were awarded. The first place was won by René Bohórquez, with The piece “Incarnated”; The second place by William Hernández, with “Acrilycs of Milagro”; and like previous biennials, revelation artists were awarded and mentions of honor were delivered

With this background, there is no doubt that the organization of a Fourth International Biennial of Painting in the Luís Noboa Naranjo Museum, will be very well received and will be a total success.